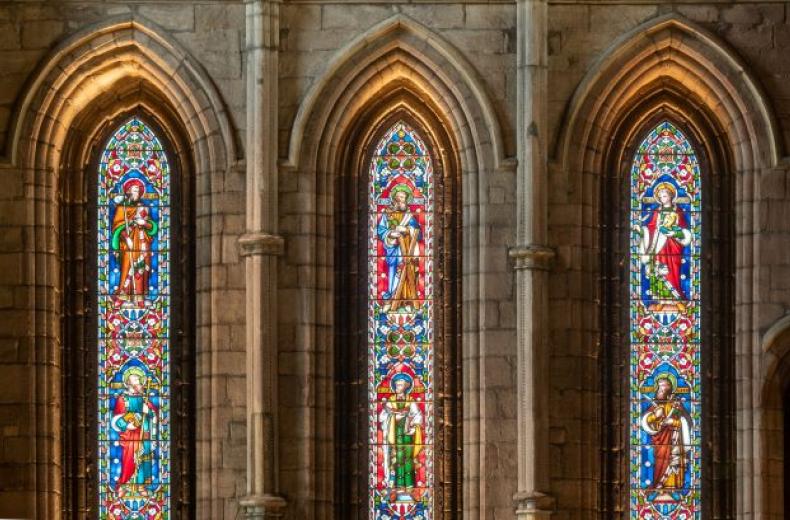 Some of the brightest and most colourful parts of Hexham Abbey, the stained glass windows date mainly from Victorian times and later. They depict a number of religious and local scenes, as well as paying tribute to armed forces and charitable organisations.

When you arrive in the Abbey by the South Transept, straight ahead of you are the six tall lancet windows of the north wall. The stonework itself dates from the 13th century, but, sadly, the original glass was destroyed by puritans and reformers after the canons were expelled in 1537. The glass in these windows was replaced in 1837, by the sons of Bentham and Eleanor Hall, in memory of their parents.

Subjects in the six lancet windows include New Testament themes, and the Apostles and their emblems. St Andrew, Hexham Abbey's patron saint, is in the dominant position.

Other subjects featured in the North Transept include the Resurrection, St Paul and Mary Magdalene, Christ and the Blessed Virgin Mary, and St Peter and St Anne.

Thank you to Alistair Robinson for allowing us to share his wonderful photographs of the windows which you can see here.

Situated behind the High Altar, the Great East Window consists of six large lights, with figures that are approximately life-size.

The three upper lights are devoted to St Andrew, a great missionary Apostle and the patron of Hexham Abbey. They show his Call, Preaching and Martyrdom.

The three lower lights include three large figures of Christ. They illustrate the progress of Christianity at Hexham, with scenes of Christ the Light with the Roman heathens, The Living Bread with Etheldreda and Wilfrid with Abbey plans, and the Good Shepherd with Cuthbert confirming the young.

The south wall of the South Transept is home to the newest stained glass in the Abbey - the Tyrrell Window. Designed by Alan Davis of Whitby and installed in 2012, it was made possible by a generous bequest by Geoffrey and Marjorie Tyrrell. Its three lancets, their beautiful colours often casting glowing light onto the Night Stair, reflect on the theme of hospitality.

Thank you to Alistair Robinson for allowing us to share his wonderful photographs of the windows which you can see here.

The Nave contains windows on a variety of themes, from northern saints to the armed forces.

The Great West Window features episodes in the lives of the northern saints. Its subjects include Bishop Acca, the Venerable Bede, Kind Oswald, Wilfrid, Queen Etheldreda, Cuthbert, and Etheldreda’s grant of land to Wilfrid, as well as a depiction of the plans of Hexham Abbey.

The west wall of the Nave Aisle contains the Baptistry, or Children's, Window. It shows three scenes from the history of English Christianity. Some of the cherubs in the upper lights were modelled on Awdrey Savage, one of the daughters of the Reverend E S Savage, the rector of the Abbey who was instrumental in having the nave rebuilt 1907-1908.

The north wall of the Nave Aisle contains two windows commemorating the contribution of local people to the achievement of the Royal British Legion and the Royal Air Force. The third window celebrates the life of Queen Etheldreda. It was commissioned to mark the rebuilding of the Nave, and incorporates three fragments of Roman glass found at Corbridge - the only pre-Reformation glass in the Abbey.