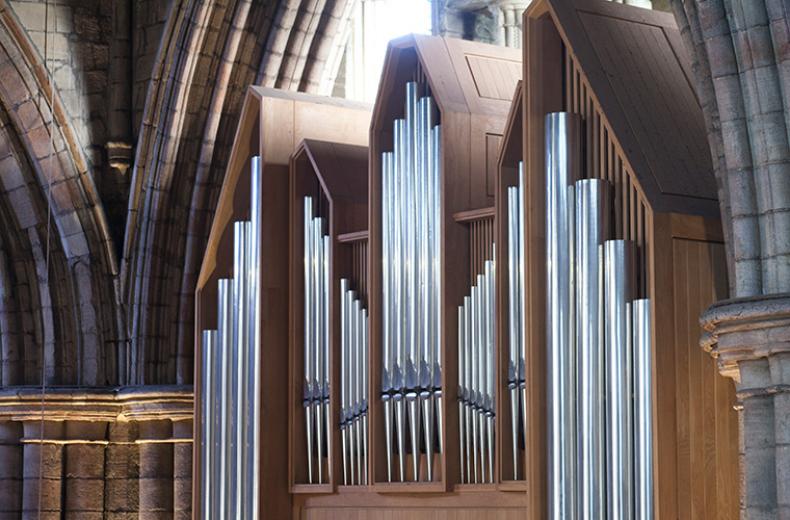 One of the jewels in Hexham Abbey's crown, the magnificent and much-loved Phelps Organ was purpose-built for the Abbey. It is a huge presence here, both physically and musically, and plays a central role in the life of the Abbey, being used for both services and regular recitals.

It is unclear when an organ was first installed in Hexham Abbey, although an 18th century engraving shows an instrument sited on the medieval screen.

In 1856 an organ originally built for Carlisle Cathedral was sold to the Abbey, and was rebuilt here in exactly the same form in which it had left Carlisle. It underwent a number of alterations in the later 19th century, and its condition gradually deteriorated.

In 1972, fundraising began for a new organ. A number of organ builders in Britain and across Europe submitted designs for the new instrument, but one design stood out above all the others, that of the Lawrence Phelps workshop in Erie, Pennsylvania.

The new organ was installed in 1974, to mark the 1,300th anniversary of the Abbey itself. The quality of the organ was recognised instantly, and it still has an enviable reputation for its singing tone, musical flexibility, and sensitive key action. Its handsome polished oak case also gives it huge visual appeal.

In 2014, the Abbey celebrated the 40th birthday of the Phelps Organ, with a recital by Dame Gillian Weir - Lawrence Phelps' widow - who had also given its inaugural recital in 1974.

Today, the organ is as much a part of Abbey life as ever. It is used for regular services and weddings, as well as for concerts and a regular recital series. CDs of the organ are available in the Hexham Abbey Shop.