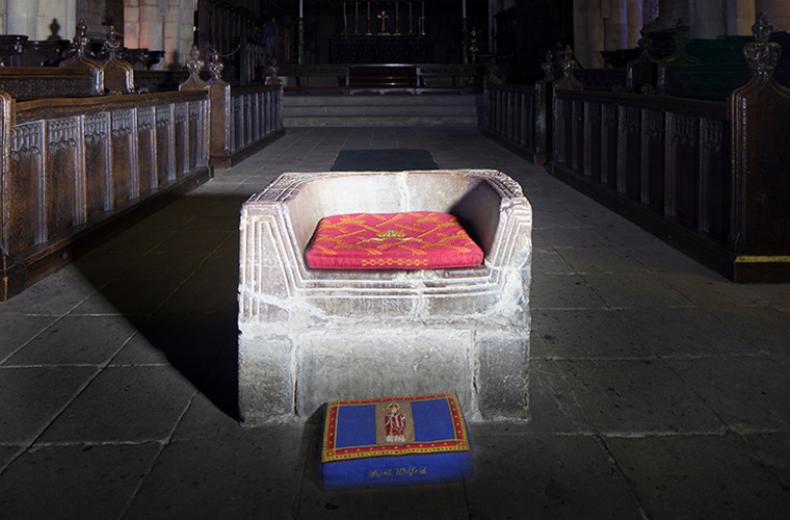 In the middle of the Choir at Hexham Abbey stands a seat, made from a solid block of sandstone. The ‘Frith Stool’ dates back to the beginnings of the Abbey, and has played an important part in the Abbey’s history, as well as the turbulent history of Hexham itself.

It is possible that Wilfrid had this stone seat made when he first founded the monastery here in 674. He had travelled through France on his way to Rome, and it is possible that he took his inspiration for the Frith Stool from examples on the continent, where they were used by bishops presiding over their teams of clergy.

Hexham was a cathedral, at the centre of a diocese, from about 678 to about 821, and this seat may have been the bishop’s 'cathedra', or official seat.

The word 'frith' is of Anglo-Saxon origin, and means 'peace, security and freedom from molestation'. In medieval England, it was possible for those fleeing conflict and persecution, and even justice, to claim sanctuary in a church. The frith stool, traditionally located near the high altar, was considered to be the safest and most protected place in the church for such refugees.

Hexham's Frith Stool has occupied its present position in the Abbey Choir since 1908, when the present nave was completed. This spot was chosen because, at the time, this was believed to have been the east end of Wilfrid’s early church, and therefore the original site of his throne. The apse of the east end of a Saxon building still exists under the spot where the chair now rests.