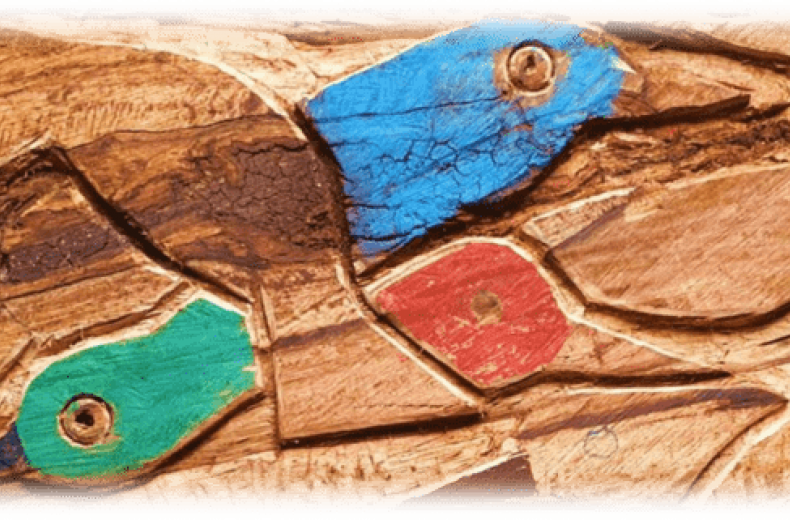 We are honoured to be briefly hosting Totem Latamat on its travels to Glasgow for COP26. The totem will travel 9,000km from Mexico in an effort to highlight the damage done by climate change and will be at the Abbey for 2 days on Monday 25th and Tuesday 26th October.

Carved by Totonac artist Jun Tiburcio, Totem Latamat will travel 9,000km from Mexico, stopping at iconic locations across the UK, before arriving at the Indigenous Elders' COP26 camp around the Sacred Fire in Glasgow's Hidden Gardens. As part of Border Crossings' ORIGINS Festival, Totem Latamat is a message from the Totonac people to our communities and world leaders conveying how deeply interwoven our existence is with nature and the need for immediate action to disrupt the damage done by climate change.

Though colonisation has historically and deliberately obscured Indigenous voices, COP26 will highlight the crucial role on Indigenous people and local communities in mitigating and adpating to the climate emergency. Cut from a single cedar tree and standing 4.5m tall, Totem Latamat demands that neither it nor its message be ignored. It will travel to important cultural hubs across the UK including London, Coventry, Milton Keynes and Manchester, drawing powerful links between Indigenous experience and local heritage. Following COP26 it will be ceremonially returned to the Earth, emphasizing the cyclical and transient nature of life and art.

"For the Totonac people, birds are our messengers. In the totem, they tell us that we must take care of life... At the top of the totem are hummingbirds, representing the aspiration for a new consciousness: they are messengers of peace between humans and nature. The face on the reverse represents the state of emergency in the world. We are so close to reaching the peak of this crisis and the raised arms of the Totonac culture represent the balance that we must find in the mind and the heart. We need to act quickly to care for the world through prayers, thoughts, connections, and laws."

Totem Latamat will be on The Cloister Lawn for 2 days; Monday 25th and Tuesday 26th October. There will be a family Totem Trail around the grounds to engage young people in learning about the totem.

There will also be an introductory and welcome talk given by Rev'd David Glover and Prof. Graham Harvey on Monday 25th October at 2pm on the Cloister Lawn.

There will then be a discussion in the Great Hall at 2pm on Tuesday 26th October with the theme of 'Religions, Ecology and Climate Change', they are free to attend and all are most welcome.

Graham Harvey is professor of religious studies at The Open University, UK. His research largely concerns “the new animism,” especially in the rituals and protocols through which Indigenous and other communities engage with the larger-than-human world. His recent teaching related work has involved a focus on foodways and on defining “religion” as sensual engagement with the world. His publications include Food, Sex and Strangers: Understanding Religion as Everyday Life (2013), and Animism: Respecting the Living World (2nd edition 2017). He is editor of the Routledge series “Vitality of Indigenous Religions” and the Equinox series “Religion and the Senses”.

Grants Awarded for East End Repairs
National Churches Trust and the Wolfson Foundation award grants totalling £21,000 to Hexham Abbey.
East End Restoration Work
Further restoration work is planned for the Abbey this year. This is to the external face of the ...
Hexham Abbey Festival of Music and Arts
We are delighted that Hexham Abbey Festival is returning for 2021. The festival will be a slightly ...
Support Us